Gymnastics Varsity 2018 has undoubtedly been the best competition yet. With the introduction of a Men’s B team competition, the standard of gymnastics has never been higher.

The final result was a Cambridge victory but this was by no means an easy win. Oxford put forward their strongest teams, achieving individual all-around medals in both the Men’s and Women’s A team competitions and a record-breaking number of Blues:

Thank you to everyone for all of your hard work in the run up to Varsity and well done on all of your performances, we are proud of you all! We had a great day competing alongside you, so we hope you enjoyed the day as much as we did!

Competition to make the teams was fierce and I don’t think our club has ever brought such a talented, amazing group of gymnasts to a Varsity match. I’m so proud of everyone’s individual performances and this is tangibly reflected in the closing of the gap of overall scores against Cambridge. So, tabs, you better watch out – we’re hot on your heels!

The inaugural Men’s B team competition is yet another tangible result of how far OUGym has come since I joined in 2015. From struggling to find a complete Men’s A team to struggling to choose who would make the B team! Even more warming is the fact that this progress has been noticed not only by club members, but by Varsity judges who return year on year and were so impressed by the standard of our men this year. Special thanks to Matt Green and Stephen Anyon, who make the long trip down from Preston each year to judge for us – we hope to welcome you both within other aspects of the club in future years!

Another massive thank you has to go to Serena Chang (President 2016/17) who did so much for the club during her time on Committee and has continued to support us after graduating: judging at both Cuppers and Varsity and providing valuable advice for the Women after the competition. OUGym provides such a supportive environment, where your team-mates are also your best friends, and I’m honoured to be a part of it.

Further thanks go our wonderfully supportive coach, Chris Seelig; all the other judges: Tracy Seelig, Philip Davis, Annie Muston and David Ho; our photographers: YueJin Oh and Zak Szymonski; and all spectators who helped create such a supportive environment. Varsity is undoubtedly the highlight of OUGym’s year and the day wouldn’t have been possible without you and I hope you all had as much fun as we did.

Thanks to Oxford’s amazing captains, Leanne Smith and Sid Baines, whom event organisation would have been impossible without. Both I and your teams have so much love and respect for you – thank you from everyone for being super captains and giving up much of your own training time to help everyone else’s routines flourish. Thanks to Sadie Robertson for taking on the arduous task of adding up scores and for Megan Gosling’s hilarious commentary. Last but definitely not least, thanks to Jess Mason for organising a super buffet social to satiate us all after a long competition – it was the perfect way to finish off the day! The OUGym committee is made up of the kindest, most helpful and most fun group of people and I’d thoroughly recommend applying! 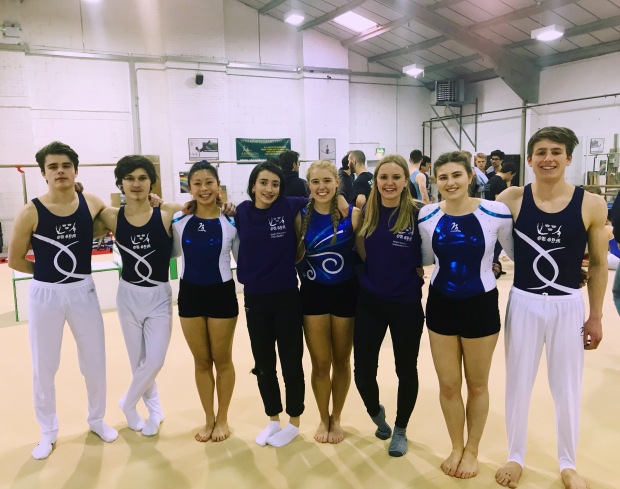 Final scores can be found below – congratulations again for the astounding number of Blues awarded this year and for all those who achieved individual medals!