On Sunday 17th February, more than twenty of Oxford’s finest gymnasts headed cross country to Marriotts Gym in Stevenage for the much-awaited 32nd Varsity Match. The competition was fierce but friendly, all teams performed really well, and the results were close.

The Women’s A team began on bars, not their favourite apparatus, but everyone competed cleanly before moving onto beam, where Kelsey Fenner built on her sixth place performance at BUCS to execute another beautiful, clean routine with a stuck backwalkover-flic series. Amelia Bowman gave a gutsy performance, competing this event for the very first time, and also delivered a really strong floor routine, showing off her fantastic flexibility and musicality; there were excellent floor scores from long standing team members Živa Alif and Katrina Kelly; and the rotation finished in the best way possible, with Women’s Captain Leanne Smith’s super leaps and crowd pleasing choreography! 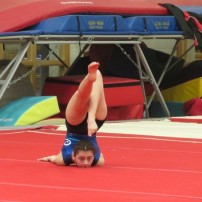 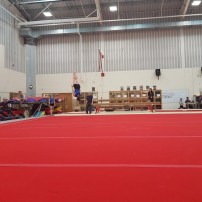 On to vault and the women rounded off their competition with a clean series of handsprings and half-ons, which brought  the final scores to a nineteen point victory to Cambridge, led by three times Varsity champion Eleanor Clifford, with Fi Chang in second place, and a joint third place for Oxford teammates Leanne and Kelsey who both had clean rounds and did the dark blue team proud!

In the Women’s B team event, there was a clean sweep for Oxford with Jess Mason, Natalie Liu and Katie Miles taking the top three all-around places after a series of strong (and sassy) floor routines and some lovely vaults. There was excellent bar work from Tiri Hughes in her first Varsity, a vault debut from Jenelle Marcelle, and a (rare) series of stuck beam routines too! 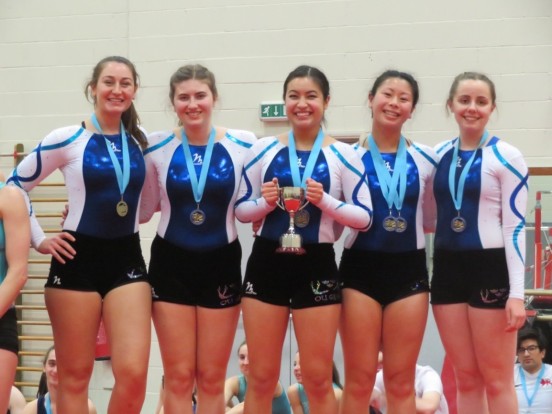 Ably led by Men’s Captain Alex Koziell, who set a personal best score in his fourth varsity, the Men’s A team put in a commanding and consistent performance, hunting down Cambridge, who were led by former Commonwealth gymnast Jack Neill, on every event. Grant Cox Sehmi showed his flair for pommels and contributed great scores on parallel bars and floor. Lewis Walker also demonstrated great consistency in his first Varsity and his heroics on high bar will long go down in history (for all the right reasons!). After a rather longer car journey than anticipated, Jamie Carpenter proved his mettle as a former Scottish national champion by competing fresh (from his run out of the car park) to pull out an elegant tumbling set, smooth parallel bar work, a winning rings performance, and a great full twisting Tsukahara on vault.

Despite training restrictions for the men on vault this term, both the A and B teams produced some lovely vaults, including a tidy Tsukahara from former captain Sid Baines (who also stormed his parallel bars and pommels sets) and stuck handsprings from experienced B team member Jack Mustafa, who placed second all-around. There were also great landings from Saad Rana and George Lee, who, in his competitive debut, went on to take bronze in the B team all around. The Men’s B team – Jack, George, Saad, Tim Riley, Rory Edwards and Anthony Poole – celebrated a magnificent victory, beating Cambridge by an impressive eighteen points; the first time an Oxford Men’s team has won at a varsity competition in living memory! 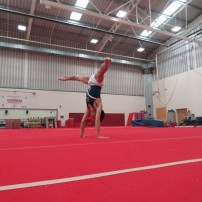 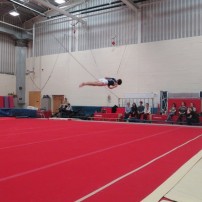 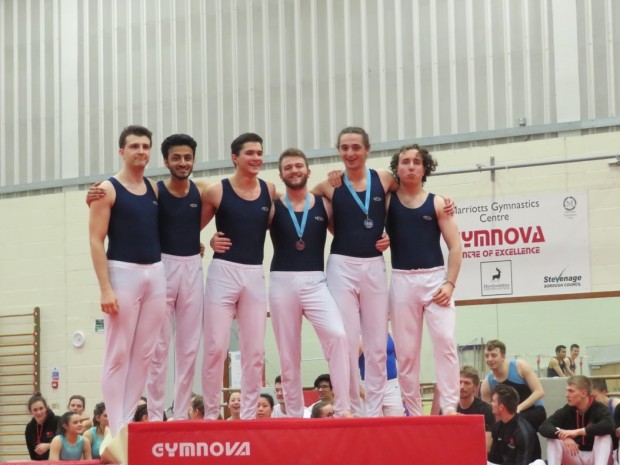 With victories for both B teams, and great performances from the A teams (especially the Men who were within 5 points of Cambridge – exceptional considering the margin was 100 points just three years ago!), we look forward to Varsity 2020 back on home soil. Well done to everyone who participated, and thanks and congrats to the judges and the Cambridge committee for arranging a great day and a lovely meal at Zizzi’s afterwards!